Throughout the last decade, the CSF High-Performance brand has made its name in the motorsports world, but many will be shocked to find out that CSF’s roots actually come from the heavy-duty and off-road world of copper/brass radiators. Since the ‘70s CSF has sold tens of thousands of H.D. Toyota radiators dating back to 3rd gen Landcruisers and FJ40s. We’re bringing it back full circle in 2020, with a renewed focus on our off-road line of heavy-duty performance radiators, especially for Toyota Trucks and SUVs.

There has been substantial growth in the Toyota off-road market, and enthusiasts are hitting the trails more than ever! Compared to some of the other SUVs on the market, the 5th Gen 4Runner is one of the major players in the US for those wanting a durable, truck-based SUV that’s as comfortable on the road as it is on the trail. As time has gone by, the demand for aftermarket performance parts has continued to grow. Enthusiasts continue to push the limits of their 4Runners – from driving in the desert sand dunes, navigating up mountain trails, to towing and hauling gear for overlanding and even partaking in extreme rock crawling and hill climbing.

One common issue found in such off-road activities is heat soak. Most off-road trails, especially rock crawling and hill climbing, are usually traversed at very low speeds with high engine power output. This can lead to engine and transmission overheating and leave drivers stranded, even in the desert or on a trail in the middle of nowhere with no rescue nearby.

Utilizing CSF’s exclusive B-Tube Technology and increasing the core size from a tiny 1-row 22mm core to an ultra-efficient 2 row 42mm core, CSF has taken care of any worries of overheating. With the increased size of the radiator, CSF has also increased the capacity of the transmission oil cooler found in the bottom tank – this will help keep transmission temperatures in check, especially when towing.

CSF has answered the call for increased performance and durability with its new 5th gen Toyota 4Runner All Aluminum Heavy-Duty Radiator. It’s the perfect answer to upgrading and safe-guarding against the weak OEM radiator with plastic end tanks.

OEM plastic/aluminum radiators make sense to produce in mass quantities to get cars and trucks through the assembly line and onto the road, but they come with many limitations – especially when drivers take their SUVs and trucks off-road or drive them in extreme conditions. After several years, the plastic tanks can start to become brittle from excessive heat cycles, can crack under heavy vibration, or can burst from extreme pressures and temperatures (including cold starts in freezing temperatures).

For additional strength and reliability, all of CSF’s all-aluminum radiators have CNC machined mounting brackets and pins – a vast improvement over the OEM plastic mounting points, which can crack under high vibration or stress – common occurrences when off-roading or towing. Considering the retail price of an OEM Toyota 5th gen 4Runner radiator, for less than $100 USD more, one can upgrade to the CSF All Aluminum Heavy-Duty Radiator. A very small premium to protect against failures while also increasing your 4Runner’s performance.

With removal of the front bumper, CSF’s All Aluminum Heavy-Duty Radiator drops right in with no modifications necessary. Even with the thicker core, there’s still enough space to clear the fan and shroud. 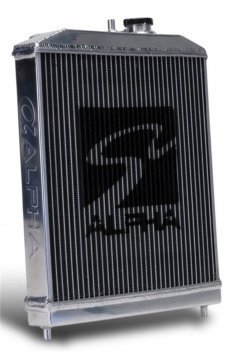 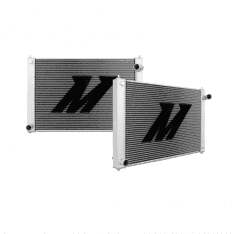 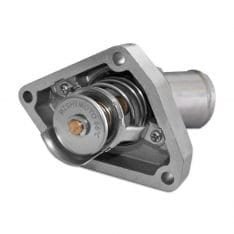